Get fresh music recommendations delivered to your inbox every Friday.

by The Ancora Duo 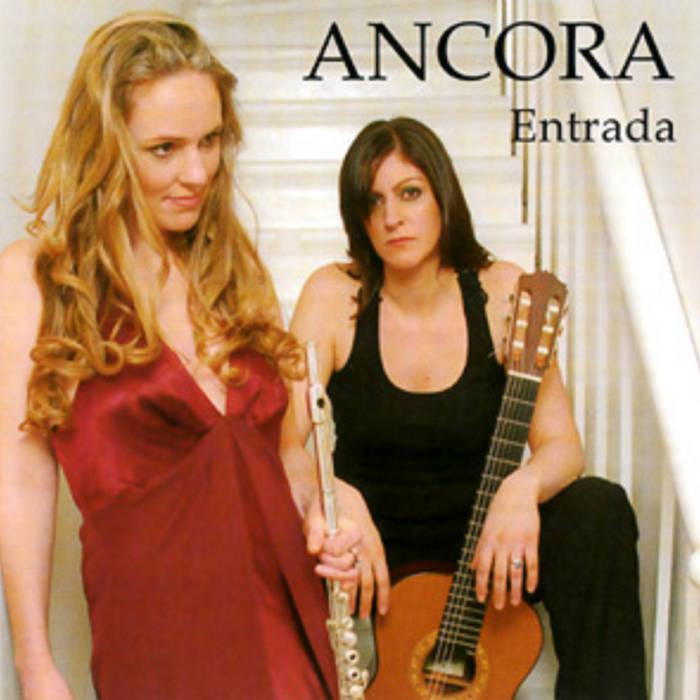 David Atkinson Brilliant choice of tracks, I love the individual and collective talents of Anne and Sarah.

Entr’acte displays French-born composer Jacques Ibert’s love for Spanish culture and is an appropriately dramatic opening to Ancora’s first CD together. The music is from the 1935 French production of Pedro Calderón's El médico de su honra and it’s Entr’acte was published that same year for flute or violin accompanied by guitar or harp (but has been performed by a variety of combinations since then). The whirling dance of the opening is inspired by flamenco guitar music and ends with a vivid depiction of the dancer with his arms in the air and a final stamp of the feet.

Like several of the other composers represented on Entrada, Scheidler was master of more than one instrument. He played the lute at the Court of the Elector to Mainz as well as performing in the Electoral Orchestra on the cello and bassoon. He was also widely respected as a player and teacher of the guitar, which was gradually taking over from the lute in popularity. Scheidler wrote many works for the lute and the guitar – this version of his Sonata for Guitar and Violin has been edited for flute and a six-string modern classical guitar.

The Pavane was a stately Spanish dance (usually paired with a quicker movement called a Galliard) and comes from the Latin word for ‘peacock” (pavonis). When Fauré began work on his Pavane he envisaged a purely orchestral work but at the suggestion of a patron added an optional chorus, usually omitted in modern performance. The piece has been used many times in popular culture, probably most famously by the BBC in its coverage of the 1998 World Cup, and has appeared on TV in episodes of Sex and the City, Top Gear and The Sopranos. It has been recorded by many non-classical musicians including Earth Wind and Fire, The Kennedys, Joe Satriani and S Club 7!

Born on St Cecilia’s day (the patron saint of music) in 1901, the composer Joaquin Rodrigo is known mainly for the sun-soaked slow movement of his Concierto d'Aranjuez for guitar and orchestra. A prolific composer of songs, concertos, choral, instrumental and theatre music Rodrigo also wrote a flute concerto in 1978 at the request of Sir James Galway, 4 years before he wrote the Serenade. The composer was almost blind from the age of 3 after contracting diphtheria and wrote all his compositions in Braille, dictating them later to a copyist.

‘I like to taste a good wine, I like to eat well, I like to live, so there wouldn't be any reason for my music to be sad. But my music is sad, because tango is sad’ said Astor Piazzolla in an interview shortly before his death in 1992. Born in Argentina he later studied in Paris with the influential composition teacher Nadia Boulanger who advised him to go back to his Tango roots to find his true musical voice. Piazzolla’s fame (and at the time notoriety) came from his bringing of Tango into the
concert halls of the world. ‘The music is more than a woman…once you marry her, she is your foreverlasting love, and you go to the grave with her.’ He wrote more than 1000 works.
Jules Massenet was the leading French operatic composer of his generation. He studied at the Paris Conservatoire as a young boy returning there in 1878 as professor of composition, having served briefly as a soldier in the Franco-Prussian war. An industrious writer, his daily schedule starting from as early as 4am! His popular Meditation is a beautiful excerpt from his opera Thais and a relaxing finale to Entrada.

ANNE ALLEN quickly became recognised as an exciting young flautist, graduating from Cambridge University and the Royal Northern College of Music with Distinction. Performing internationally, she has played in all the major UK venues such as The Queen Elizabeth Hall, St Martin in the Fields and the Cadogan Hall in London, and abroad in Europe, the Far East, Africa, Russia and South America. She has also performed on Radio 3, BBC TV and Sky TV.

Anne has won many prizes; in 2007 she was chosen as the ‘outstanding’ woodwind winner of the Computers In Personnel International Concerto Competition. Previously Anne won Norfolk Young Musician of the Year and was a finalist in the BBC Young Musician of the Year. Having spent a great deal of time in hospital recovering from a bone tumour, a highly valued side to Anne’s career is performing for the charity Music In Hospitals which brings specialized entertainment to the ill and elderly within the community. A highlight in her career was performing a concerto to the Beckhams!

In her spare time Anne is studying for a BSc in Psychology at Birkbeck, is starting up a record company in India and is a True Blue – a member of Chelsea Football Club!

SARAH FREESTONE began her musical career aged 7, playing and singing in folk clubs and by the age of 11 she was gigging regularly on guitar with her junior school jazz combo “The Average Height Band”… She went on to study guitar and violin at the Royal Academy of Music, winning several prizes and awards on the way including the Julian Bream Prize, Queensland Conservatorium of Music Guitar Prize and semi-finalist in the Tarrega International Guitar Competition.
Sarah has worked in a wide variety of musical genres, as both writer and performer, from classical music to jazz, rock and pop. She is in demand as a multi-instrumentalist, performing with the legendary Lee Hazlewood on violin, guitar, vocals and percussion at the South Bank’s 2004 Meltdown Festival and recently touring the UK and the US with Alison Moyet as her backing vocalist, violinist and guitarist. Sarah is a violinist with the BBC Concert Orchestra and can often be heard on “Friday Night Is Music Night”, the world’s longest-running live music programme on radio.

For more information about THE ANCORA DUO please visit www.anne-allen.com.

Anne Allen is an exceptional flautist who pours her passion for life into every performance. Since graduating from Cambridge and RNCM (with Distinction) Anne has had a wide range of performing experience as a soloist & orchestral musician. Having overcome serious illness several years ago, Anne has emerged out of this experience with skills and strengths that have enriched her playing. ... more

Bandcamp Daily  your guide to the world of Bandcamp